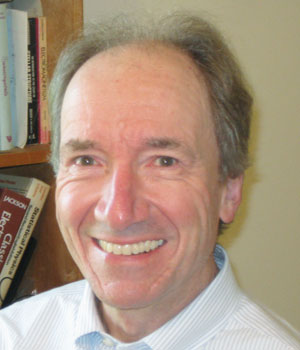 
"For seminal work on the theory of flocking that marked the birth and contributed greatly to the development of the field of active matter."


John Toner received a BS in Mathematics from MIT in 1977, and an MS (1979) and Ph.D. (1981) in Physics from Harvard University. From 1981 to 1983, he was the James Franck Fellow at the University of Chicago. He then spent 12 years as a Research Staff Member at the IBM T. J. Watson Research Center. Since 1995 he has been Professor of Physics at the University of Oregon. Dr. Toner is a Fellow of the American Physicial Society, and was a Simons Fellow in Theoretical Physics (2012-2013). Since 2015, he has been a Higgs Fellow at the University of Edinburgh. He is currently the Martin Gutzwiller Fellow at the Max Planck Institute for the Physics of Complex Systems in Dresden, Germany. In addition, he has held visiting appointments at Imperial College, London; the Lorentz Centre of Leiden University; University of Aberdeen; The Graduate Center of CCNY; and UC Berkeley. He is a frequent visitor at the KITP, Santa Barbara, and the Aspen Center for Physics. He has studied a variety of condensed matter and other complex systems using the techniques of long-wavelength condensed matter physics, including elastic theory, hydrodynamics, and the renormalization group. These include active matter; active Bose-Einstein condensation; sliding phases in biophysical and quantum systems; novel phases of DNA; fluctuating membranes; and liquid crystals in disordered media.