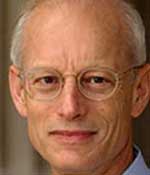 
"For lifetime contributions to nuclear many-body theory including identifying mechanisms for saturation and relating the Skyrme interaction to fundamental nuclear forces; and for initiating and leading efforts to understand the nucleon using lattice QCD."


John Negele earned his BS in Engineering Sciences at Purdue University in 1965 and PhD in Theoretical Physics at Cornell University in 1969, and was a Postdoctoral Research Fellow at the Niels Bohr Institute. He joined the MIT faculty in 1970, progressing to Professor of Physics in 1979, served as the Director of the Center for Theoretical Physics from 1989 to 1998, and was appointed to the William A. Coolidge Chair in 1991.

He has received Sloan, Guggenheim, and Humboldt Fellowships, is a Fellow of the AAAS and APS, served as the first Chair of the APS Division of Computational Physics, and has served on numerous APS committees including the Bonner and Bethe Prize Committees.

The goal of Negele's research is to understand how the structure of matter arises from its underlying constituents and their interactions. He formulated the first density functional theory for finite nuclei based on the nucleon-nucleon interaction. He and his collaborators used it to calculate nuclear binding energies, single particle energies, and charge distributions, and the properties of neutron star matter. Currently, he is using lattice field theory to solve QCD and thereby understand the structure of nucleons in terms of their quark and gluon constituents.