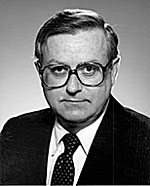 
"For insightful experiments and contributions to the understanding of 2-D phase transitions and orientation epitaxy; for major contributions in management of science in government, national laboratories, and industry; and for championing new paradigms for collaboration, such as the Partnership for Next Generation Vehicles."


Dr. McTague has had a diverse career in industry, academia, and government. He received his BS from Georgetown University in Chemistry and his Ph.D. from Brown University. He began his research career at Rockwell International in 1964 where he collaborated on the first observations of collision induced raman scattering. In 1970 he joined the chemistry faculty at UCLA where he had a joint appointment in the Institute of Geophysics and Planetary Physics. There and at Riso and Brookhaven National Laboratories, he did experimental and theoretical studies of the structure and dynamics of condensed phases, including Z-D phase transition and orientational epitaxy.

Following a stint as Chair of the National Synchrotron Light Source Dept. at Brookhaven, he became Deputy Director and then Acting Director of the Office of Science and Technology Policy (1983-1986). He then joined Ford Motor Company as vice president of research, moving to his present position as vice president of technical affairs in 1990. He was a founder of cooperative automotive research efforts, including USCAR and the Partnership for a New Generation of Vehicles.

Dr. McTague has received Guggenheim, Sloan and NATO Senior fellowships, as well as an honorary Doctorate of Science from Brown University. He is Chair of the Board of Overseers of Fermilab, a member of the Secretary of Energy Advisory Board, as well as co-founder and Vice Chairman of the National Laboratories Operations Board, and a member of the Board of the National Action Committee for Minorities in Engineering.