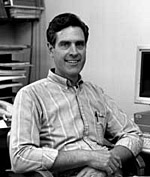 
"For their leading contributions to the discovery of the long b-quark lifetime with the MAC and Mark II experiments at SLAC. The unexpectedly large value of the b-quark lifetime revealed the hierarchy of the Cabibbo-Kobayashi-Maskawa quark mixing matrix"


John Jaros attended MIT, graduating with a Bachelor of Science degree in Physics in 1968. He did his graduate work in experimental particle physics at the University of California at Berkeley, receiving his PhD in 1975. Jaros followed the November Revolution to SLAC, where he joined the Mark I Collaboration. He has remained at SLAC since then, following Mark II from SPEAR to PEP and eventually to SLC, where he served as collaboration spokesman during its final year. He joined the SLAC faculty in 1979 and served as Faculty Chair 2001-2005. Jaros is a Fellow of the APS and a member of Sigma Xi.

Jaros served on the SSC Detector R&D Advisory Committee and DESYs Program Review Committee. He has chaired several conferences, including the 1999 Lepton Photon Symposium. He is a co-Director of the SLAC Summer Institute since 2001. Jaros became Divisional Councilor for the DPF in 2004. He was a co-convener at Snowmass 2001, is a member of the Organizing Committee for the World Wide Study of Physics and Detectors for the Linear Collider, and is Co-Coordinator of the Silicon Detector Design Study.

Jaros physics interests have centered on vertex physics: measuring heavy quark and lepton lifetimes and mixing, and tagging quark flavor and charge. At PEP, he led the Mark II Secondary Vertex Detector project, and measured the tau, charm, and b lifetimes. With the Mark II at SLC, he led the Drift Chamber Vertex Detector project, and helped measure the b fraction at the Z with a lifetime tag. Later with the SLD Collaboration, he contributed to upgrading the CCD vertex detector and joined the hunt for Bs mixing. He also led a small experiment which searched for millicharged particles at SLAC. Jaros current interests center on the physics and detectors for the International Linear Collider.