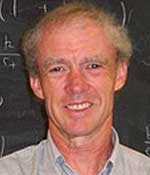 
John Francis Gunion, Ph.D., received his undergraduate degree in physics from Cornell University (Ithaca, N.Y.) in 1965 and his Ph.D. from the University of California, San Diego in 1970, followed by a postdoctoral fellowship in 1970 through 1972 at the Stanford Linear Accelerator Center and the Massachusetts Institute of Technology (Cambridge) from 1972 to 1973. Dr. Gunion was on the faculty at the University of Pittsburgh from 1973 to 1975, before moving to the University of California, Davis in 1975, where he remained until his retirement this year as a Distinguished Professor. During his tenure with UC Davis, Dr. Gunion led the Department of Energy’s High Energy Theory Group and created the High Energy Frontier Theory Initiative. His 266 publications in refereed journals and 205 publications in conference, workshop proceedings, and reports have 41,000 citations and an H index of 100. With Howard Haber, Ph.D., Gordon Kane, Ph.D., and Sally Dawson, Ph.D. he co-wrote the highly regarded and much-referenced, "Higgs Hunters Guide” (Westview Press) The book is a seminal monograph on Higgs boson theories, signals, and search techniques. As a result of his early work establishing the importance of the two-photon and four-lepton search modes for detecting a Standard Model Higgs boson and the detector properties needed to exploit them, Dr.Gunion was made a member of the Large Hadron Collider Compact Muon Solenoid (CMS) collaboration and was coauthor on the CMS Higgs discovery paper in which these modes played key roles. His current research focuses on theories of extended Higgs boson sectors and supersymmetry with special focus on the prospects for observing the predicted new particles at the LHC and other future colliders. Organizer of numerous conferences and workshops, Dr.Gunion has been a member and often key contributor to many future collider physics and detector working groups. He was awarded an A.P. Sloan Fellowship from 1974 to 1978, and is a member of the American Association for the Advancement of Science and the American Physical Society Division of Particles and Fields. Dr. Gunion was elected a fellow of the American Physical Society in 1989.