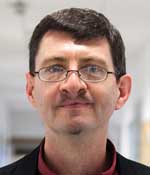 
"For outstanding leadership of the International Year of Light (2015) and for optical science and engineering outreach on a global scale."


John M. Dudley, Ph.D., is a professor of physics at the FEMTO-ST Institute, part of The National Center for Scientific Research (CNRS), and at the Université de Franche-Comté (Besançon, France). He also serves as chair of the international steering committee for the International Year of Light and Light-based Technologies 2015. Dr. Dudley received his B.S. in 1987 and his Ph.D. in 1993, both from the University of Auckland (New Zealand). He did his postdoctoral fellowship at the University of St. Andrews (U.K.) and was a lecturer at the University of Auckland prior to his appointment in 2000 as a professor at Université de Franche-Comté. Dr. Dudley’s research covers broad areas of optical science, including ultrafast optics, nonlinear fiber optics, and extreme events. He has published over 160 papers and delivered over 120 invited talks at major conferences, and has won several awards and fellowships, including the the Médaille d'Argent from the CNRS the Society of Photo-Optical Instrumentation Engineers (SPIE) President’s Award, and The Optical Society’s Robert E. Hopkins Leadership Award. Dr. Dudley is a past president of the European Physical Society, is a Member of SPIE, and a fellow of the Institute of Electrical and Electronics Engineers, the OSA and the European Optical Society.