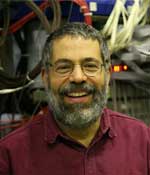 
"For the introduction and use of innovative plasma techniques which produced the first demonstration of the trapping of antihydrogen."


Joel Fajans received his undergraduate degrees in Physics and in Electrical Engineering from the Massachusetts Institute of Technology in 1980.  He stayed at MIT for his 1985 doctoral degree on Free Electrons Lasers under the guidance of Professor George Bekefi, where he was supported by a Hertz Foundation Fellowship.  His thesis was honored by a Marshall N. Rosenbluth Outstanding Doctoral Thesis Award (then called the Simon Ramo Award) from the American Physical Society, and by a Hertz Foundation Doctoral Thesis Prize.  He then went to the University of California, San Diego for post-doctoral studies under Professors John Malmberg and Tom O’Neil on non-neutral plasmas.  In 1986, Fajans joined the faculty of the University of California, Berkeley, where he is now a Professor of Physics.  His research concentrated on non-neutral plasma physics, two-dimensional fluid dynamics, and non-linear dynamics.  In 2003, he joined the newly-formed ALPHA collaboration at CERN, which studies the trapping and properties of antihydrogen.

Fajans has been a Miller Fellow at Berkeley, a National Science Foundation Presidential Young Investigator, and an Office of Naval Research Young Investigator.  He is a fellow of the American Physical Society, and served on the Executive Committee of the Division of Plasma Physics.