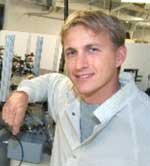 
"For his dissertation describing the detection, characterization, and imaging of coherent THz radiation from laser-wakefield-accelerated electron beams."


Jeroen van Tilborg completed his undergraduate and Master's degree in Applied Physics at the Technische Universiteit Eindhoven in 2001. In 1999 he spent a few months on an internship at LBNL (LOASIS group) in Berkeley, which turned out to be the first step towards a longer than expected journey to the USA. He returned to LBNL (LOASIS group) in 2001 to work on his Ph.D. under Wim Leemans, although officially enrolled at Eindhoven under Marnix van der Wiel. His work was focused on temporal characterization of the femtosecond bunches produced by the wakefield accelerator. This was done through analysis of the coherent transition radiation emitted by the 50-femtosecond bunches as they leave the plasma. Jeroen is presently a postdoc at LBNL in the Atomics and Molecular Optics group, doing studies of atomic and molecular dynamics using ultra-short intense VUV pulses produced through High Harmonics Generation.