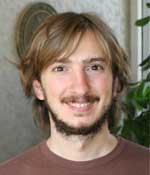 
Javier von Stecher was raised in Buenos Aires, Argentina, and attended the University of Buenos Aires where he worked on the Casimir effect under Prof. F. D. Mazzitelli of the Physics Department. In 2002, he earned his Licenciatura degree in physics. In 2003, he moved to Boulder, Colorado, to begin graduate studies at the University of Colorado. In 2004, he joined Chris Greenes group at JILA, a joint institute of the National Institute of Standards and Technology and the University of Colorado, Boulder. His research focused on the study of ultracold few-body systems with tunable interactions. Through the application of powerful numerical techniques, he was able to improve the general understanding of few-body phenomena, in particular four-body processes. Since defending his dissertation in 2008, he has joined Dr. Ana Maria Reys group at JILA as a postdoctoral research associate. He is currently studying ways to control and manipulate quantum mechanical interactions in many-body quantum systems at both nano and mesoscopic scales.