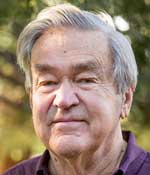 
James Daniel "B.J." Bjorken, Ph.D., is an American theoretical physicist. He was a Putnam Fellow in 1954, received his B.S. in physics from the Massachusetts Institute of Technology (Cambridge) in 1956, and obtained his Ph.D. from Stanford University (Palo Alto, Calif.) in 1959. He was a visiting scholar at the Institute for Advanced Study in the fall of 1962. Dr. Bjorken is an emeritus professor at the Stanford Linear Accelerator Center (SLAC), and was a member of the theory department of the Fermi National Accelerator Laboratory in Batavia, Illinois from 1979 to 1989. He was awarded the International Centre for Theoretical Physics Dirac Medal in 2004 the 2015 Wolf Prize in Physics and the 2015 European Physical Society High Energy Particle Physics Prize. In 1968, Dr. Bjorken discovered light-cone scaling (or Bjorken scaling), a phenomenon in the deep inelastic scattering of light on strongly interacting particles known as hadrons. Experimentally observed hadrons behave as collections of virtually independent point-like constituents, when probed at high energies. Properties of these hadrons scale, that is, they are determined not by the absolute energy of an experiment, but, instead, by dimensionless kinematic quantities, such as a scattering angle or the ratio of the energy to a momentum transfer. Because increasing energy implies potentially improved spatial resolution, scaling implies independence of the absolute resolution scale, and hence effectively point-like substructure. This observation was critical to the recognition of quarks as actual elementary particles (rather than just convenient theoretical constructs), and led to the theory of strong interactions known as quantum chromodynamics, where it was understood in terms of the asymptotic freedom property. In Dr. Bjorken's picture, the quarks become point-like, observable objects at very short distances (high energies), shorter than the size of the hadrons. In 1982, Dr. Bjorken was also among the first to point out the phenomena of jet quenching in heavy ion collisions. Richard Feynman, Ph.D. subsequently reformulated this concept into the parton model, used to understand the quark composition of hadrons at high energies. The predictions of Bjorken scaling were confirmed in the early late 1960s electroproduction experiments at SLAC, in which quarks were seen for the first time. The general idea, with small logarithmic modifications, is explained in quantum chromodynamics by "asymptotic freedom". Dr. Bjorken co-authored, with Sidney Drell, Ph.D., “LSC Relativistic Quantum Mechanics” (McGraw-Hill), a classic companion volume textbook on relativistic quantum mechanics and quantum fields.