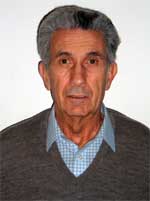 
"For leadership in the series of experiments that resulted in a multitude of precision measurements of properties of neutral K mesons, most notably the discovery of direct CP violation."


Italo Mannelli  was born in Florence (Italy) on July 17th 1933  and there he attended school  till he moved to the Scuola Normale Superiore of  Pisa in 1953, as winner of the national admittance competition. He obtained the Laurea in Physics at the University of Pisa in 1957 and the Diploma of the Scuola Normale in 1958.  He was awarded the Libera Docenza in Physics in 1964 . After teaching as lecturer and assistant professor he was nominated in 1968 full professor with the Chair of Elementary Particle Physics at the University of Pisa . During 1975-1998 he worked as senior physicist on the staff of CERN.  Back in Pisa  he moved in 1987 to the Scuola Normale Superiore, where he is at present.

His early experimental research activity was with bubble chamber, starting with the proof of Parity violation in lambda decay, using pictures taken by the Columbia group at the BNL Cosmotron and continuing with the construction of a fast cycling bubble chamber used to measure the polarization of the recoil protons from pi0 photoproduction at the Electron-syncrotron at Frascati. In 1961-1964, as winner of a NATO fellowship and research associate at MIT, he worked with spark chambers at the BNL-AGS, in particular exploiting High-Z spark chamber for the first systematic study of  pion charge exchange and production of neutral resonances .  In 1965 he joined a Saclay group at CERN where, using a polarized target, spin effects in pion charge exchange were dectected in contradiction with the Regge pole model. This kind of study was extended up to 40 GeV using the beams from the Serpukov Proton Syncrotron, at the time the worlds highest energy accelerator . Later on ,while at CERN, he first worked with W. Willis and collaborators at the ISR on single photon and jets production. From 1980 on he worked on the NA31 experiment, which produced in 1987 (Hamburg- Lepton and Photon Symposium) the first evidence of Direct CP violation in two-pion neutral Kaon decays. The subsequent NA48 experiment, designed with the specific aims of improving the statistical and systematic accuracy by a factor of about four, succeeded in measuring the Direct CP violation as planned. Work is now in progress at CERN on charged Kaon decays to three pions and other more rare modes. Italo Mannelli has been Vice-President of INFN, Research Director at CERN, Chairman of the CERN Scientific Policy Committee and member of the ERC review Committee on LHC . He has also served , in various capacities, in several national and international scientific bodies. In 2002 he was nominated corresponding member of the Accademia Nazionale dei Lincei. Among the Prizes awarded to him, the most significant are the Premio Triennale Somaini and, in the Year 2000, the Premio Tartufari of the Accademia dei Lincei. He is Socio Benemerito of the Italian Physical Society.