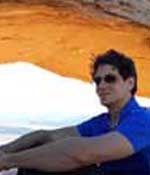 
Ido is a third-generation Technion alumni – both his parents and his grandfather are Technion graduates. Ido is a graduate of the Technion Excellence Program, receiving his Bachelor in both Electrical Engineering and Physics. He was granted the Knesset (Israeli Parliament) Award for outstanding undergraduate student achievements in 2007. Ido has completed his PhD degree in the Physics Department under the supervision of Distinguished University Professor Mordechai (Moti) Segev. In his dissertation he discovered new classes of accelerating beams in nonlinear optics and electromagnetism, for which he received the 2012 Israel Physical Society Prize (awarded to two graduate students annually, a theorist and an experimentalist). In the end of 2011, he found the full vector solutions of Maxwell’s equations for shape-preserving beams that can bend by themselves to almost 180°. He predicted that this novel dynamics of accelerating waves will exist in virtually any linear and nonlinear wave system in nature, including many classical waves, such as sound waves, surface waves, waves on membranes, and more. Ido is currently a Marie Curie fellow in MIT working in the group of Prof. Marin Soljačić. His research at MIT includes several projects at the intersection of optics, electromagnetism, and quantum mechanics. One interesting direction of his research involves engineering the quantum wave function of electrons, which has promising applications in electron microscopy.