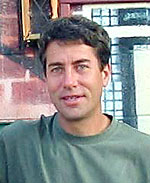 
"For the conception and first realization of hydrodynamic shock-formed plasma channels, and for the development of diagnostics for their characterization."