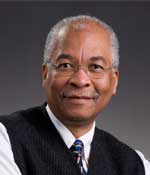 
"For his contributions to KTeV experiments and the establishment of a new kind of interaction distinguishing matter from antimatter, as well as his outstanding public service and mentorship roles."


Herman B. White, Jr. completed his A.B. physics degree at Earlham College (1970), M.S. degree in Nuclear and Accelerator Physics at Michigan State University (1974), and Ph.D. in Elementary Particle Physics at Florida State University (1991). He was a Resident Research Associate in Nuclear Physics at Argonne National Laboratory (1971), an Alfred P. Sloan Travel Fellow at the CERN Laboratory (1972), and University Fellow at Yale from 1976-78. His research has covered a range of topics in Particle and Nuclear Physics, and work with Accelerators and Particle Beams. He has been a scientist at Fermilab for the past 35 years, and early in his career he contributed to the development of an empirical formula (Stefanski and White) widely used at that time in the calculation of neutrino flux in high-energy interactions.  His work in HEP has included studies in prompt muon production, hadronic pair production, neutrino and kaon physics, including the discovery of direct CP violation in neutral K-meson interactions with the KTeV collaboration. His current research focuses on neutrino cross-section measurements and muon conversion experiments.
In addition to his Fermilab position, he has served as an Illinois Research Corridor Fellow and Adjunct Professor of Physics at North Central College in Naperville, Illinois for the past 15 years where he is also vice chairman of the Board of Trustees. For many years, Dr. White has led numerous communication efforts to bring a focus on physics and physical science research to the U.S. Congress and governmental agencies, including service on advisory panels for the U.S. Department of Energy, National Science Foundation, NASA, and The National Academies. His work includes a number of American Physical Society (APS) committees and forums. He is a member of advisory boards for the QuarkNet Project; the Illinois Institute of Technology Department of Biology, Chemistry, and Physical Sciences; the National Society of Black Physicists; and a number of governing boards of directors.