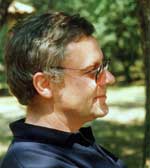 
"For leadership in the series of experiments that resulted in a multitude of precision measurements of properties of neutral K mesons, most notably the discovery of direct CP violation."

Since 1969 Research Staff at the European Laboratory for Particle Physics CERN in Geneva. Investigations of neutral kaon and hyperon decays at the CERN PS until 1974. Precision measurements of various parameters in the neutral kaon system, in particular the CP violating two pion decay amplitude, its phase and the charge asymmetry in semileptonic decays.

At present Professor of Physics at the University of Ferrara.