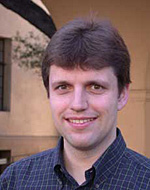 For his outstanding research on determining initial data for the dynamics of black holes.


Harald Pfeiffer began his undergraduate study at the University of Bayreuth, Germany, in 1994. In 1997, he continued at Cambridge University, where he completed Part III of the Mathematical Tripos in 1998. In the same year he entered the graduate program in Physics at Cornell University, where he was awarded a M.Sc. in 2001, and a Ph.D. in 2003. He currently works at the California Institute of Technology as Sherman Fairchild Postdoctoral Scholar in Physics.

Haralds primary research interest lies in the numerical study of black holes. His thesis research under the supervision of Saul Teukolsky concentrated on various aspects of the initial value problem of General Relativity, ranging from its mathematical formulation over the development of a multidomain pseudospectral elliptic solver to the construction of astrophysically realistic initial data for black hole evolutions. At Caltech, his focus has shifted to black hole evolutions, with a continued emphasis on elliptic aspects of this problem. Harald has also a broader interest in theoretical astrophysics, where he has worked on twisted accretion disks, as well as studies of black hole magnetospheres.