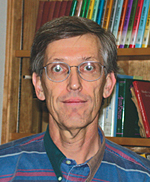 
"For his pioneering work in quantum optics, for his innovative experiments in single-atom optical experiments, and for his skill in communicating the scientific excitement of his research to a broad range of audiences."


Kimble is the William L. Valentine Professor and professor of physics at the California Institute of Technology. His B. S. degree is from Abilene Christian University, where he graduated summa cum laude in 1971. He completed his doctoral degree in 1977 at the University of Rochester. After spending two years as a staff scientist at the General Motors Research Laboratories, he joined the faculty at the University of Texas at Austin in 1979, where he eventually held the Sid Richardson Regents' Chair of Physics before moving to Caltech in 1989. The general areas of his research activities are quantum information science and the quantum dynamics of open systems, including quantum measurement on various fronts, cavity quantum electrodynamics, and the quantum-classical interface. Kimble is a Fellow of the American Association for the Advancement of Science, the American Physical Society, and the Optical Society of America, and is a Member of the National Academy of Sciences. Awards that he has received include the Einstein Prize for Laser Physics (1989), the Albert A. Michelson Medal of the Franklin Institute (1990), the Max Born Award of the Optical Society of America (1995), and the International Award on Quantum Communication (1998).