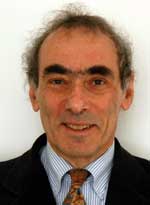 
"For fundamental applications of statistical physics to quantum fluids, including Fermi liquid theory and ground-state properties of dilute quantum gases, and for bringing a conceptual unity to these areas."


Gordon Baym received his bachelor's degree in physics from Cornell University in 1956, his A.M. in mathematics from Harvard in 1957, and his Ph.D. in physics from Harvard in 1960, where he was a student of Julian Schwinger. After a two year postdoc at the now Niels Bohr Institute in Copenhagen (where he is currently an Adjunct Professor), and a year at the University of California, Berkeley, he came to the University of Illinois in 1963. His research spans condensed matter and statistical physics, including quantum fluids, Bose-Einstein condensation in atomic vapors, astrophysics, nuclear physics, and the history of physics. He is a pioneer in the study of matter under extreme conditions of density and pressure and a leader in the conception of the Brookhaven Relativistic Heavy Ion Collider (RHIC). He is a member of the National Academy of Sciences (where he chaired the Physics Section), the American Philosophical Society, a Fellow of the American Academy of Arts and Sciences, the American Association for the Advancement of Science, and the American Physical Society, and the recipient of the 2002 Hans A. Bethe Prize of the American Physical Society.