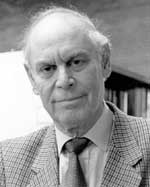 
"For his pioneering work in the history of physics, especially on Einstein and relativity. His writing, lecturing, and leadership of major educational projects introduced history of physics to a mass audience."

His undergraduate degrees came from the City of Oxford School of Technology and from Wesleyan University; his PhD is from Harvard University (1948).

His book publications include Thematic Origins of Scientific Thought: Kepler to Einstein; Science and Anti-Science; The Scientific Imagination; Einstein, History, and Other Passions; Victory and Vexation in Science: Einstein, Bohr, Heisenberg and Others; and, with Gerhard Sonnert, two books on the careers of women scientists. He was the founding editor of the quarterly journal Daedalus and of Science, Society and Human Values, and was member of the Editorial Committee of the Collected Papers of Albert Einstein.

His honors include the Sarton Medal of the History of Science Society, the J.D. Bernal Prize of the Society for Social Study of Science, the Andrew Gemant Award of the American Institute of Physics, the Oersted Medal of the A.A.P.T., and selection as the Herbert Spencer Lecturer at Oxford University, and as the Jefferson Lecturer by the National Endowment for the Humanities.