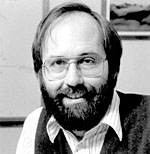 
"For pioneering work in trapping, cooling, and precision measurements of the properties of matter and antimatter in ion traps."