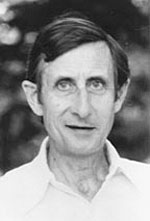 
"For his thoughtful, elegant and widely published writings regarding the impact of diverse science and technology developments on critical societal issues and on fundamental questions for humankind."