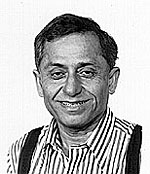 
"For his careful and skillful experiments and interpretative concepts concerning important structures in turbulence and vortex dynamics, for his new turbulence measurement techniques, and for provoking his students and colleagues to think in fresh ways about turbulence."

Dr. Hussain's research has been in the areas of transition and turbulence phenomena and their control in jets and shear layers, vortex dynamics and reconnection, coherent structure/turbulence coupling, and measurement techniques including holographic velocimetry. His current interests include turbulent boundary layer structure, chaos control in open flows and swirling flows.

Dr. Hussain is a Fellow of the APS and ASME and an Associate Fellow of AIAA and the Third World Academy of Science. He was awarded the Eckhart Prize for Outstanding Ph.D. dissertation in 1971, the Engineering College's Research Award in 1978 and the University's Senior Research Award in 1985. He was named Freeman Scholar by ASME in 1984. He has served on the editorial board of Physics of Fluids (1981 - 1984), Journal of Fluids Engineering (1995 - 1998).