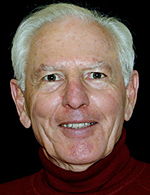 
"For his landmark simulations of fracture, 2-d melting and properties of membranes."


Abraham received his B.S. in 1959 and Ph.D. in1962, both in physics, from the University of Arizona. He spent two postdoctoral years at the University of Chicago and two research years at the Lawrence Livermore National Laboratory. He joined IBM in 1966. Over four decades he has pursued a wide range of computational physics applications, mainly in condensed matter physics and chemical physics. Research topics include the dynamics of first-order phase transitions, the thermodynamics and structure of surfaces and interfaces, melting in two dimensions, the dynamics of solid, flexible membranes, the nonlinear turbulent dynamics of coupled chaotic oscillators, and the dynamics of brittle and ductile materials failure. Abraham created The MAAD simulation project that achieved the seamless union of the continuum, atomistic and electronic structure descriptions of matter for the study of rapid brittle fracture. At the new millennium, he and his colleagues simulated the dynamics of work hardening using over one billion atoms.

In 1991/2, Abraham created an upper-division undergraduate course in computational physics during a sabbatical at the University of California at Santa Barbara. He held the Sandoval Vallarta Chair at the Universidad Autonoma Metropolitana in Mexico City in 1994. He has been awarded several IBM Outstanding Technical Achievement Awards. He is a Fellow of the American Physical Society and was an APS Centennial Speaker. Abraham was the Chair of the APS Division of Computational Physics in 2000-2001. He recently was elected the recipient of the Alexander von Humboldt Research Award for Senior Scientists.