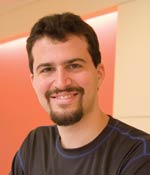 
"Evolution and the emergence of structure."


Erez Lieberman-Aiden studied Mathematics, Physics, and Philosophy at Princeton University, and received an Master's degree in Applied Physics from Harvard. He recieved a PhD in Applied Mathematics and Health Science and Technology from Harvard and MIT, where he was supported by fellowships from the NSF, the NDSEG, and the Hertz Foundation. His work integrates mathematical and physical theory with the invention of new technologies. As a graduate student in the laboratory of Eric Lander, Erez devised the Hi-C method for reconstructing the 3D structure of the human genome. Together with Nynke van Berkum, a postdoc in the lab of Job Dekker, he led the team that implemented Hi-C in practice. They discovered the existence of a new type of genetic regulation, in which genes move from one compartment to another as they are turned on and off. They also observed a never-before-seen polymer configuration, the fractal globule, which enables the genome to pack extremely densely without forming knots.

In 2009, Technology Review named him as one of the TR35: Top 35 Innovators Under the Age of 35. He was also recognized with the Lemelson-MIT student Prize for the best student inventor at MIT, as well as the Hertz Foundation's Doctoral Thesis Prize. His work has appeared on the covers of both Nature and Science. Erez is currently a fellow at the Harvard Society of Fellows, and is a member of the American Physical Society.