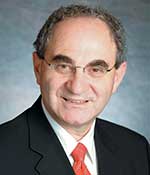 
"For seminal achievements in solar cells and strained quantum well lasers, and especially for creating the field of photonic crystals, spanning both fundamental science and practical applications of that science."


Eli Yablonovitch received his B.Sc. in physics from McGill University in 1967 and his Ph.D. in Applied Physics from Harvard University in 1972. He is currently Director of the NSF Center for Energy Efficient Electronics Science (E3S), a multi-University Center headquartered at Berkeley. In his photovoltaic research, Yablonovitch introduced the 4(n squared) "Yablonovitch Limit" light-trapping factor that is in worldwide use, for almost all commercial solar panels. He introducted the idea that strained semiconductor lasers could have superior performance due to reduced valence band (hole) effective mass. Thanks to this concept, most optical telecommunication today occurs by strained semiconductor lasers. He is regarded as a Father of the Photonic BandGap concept, and he coined the term "Photonic Crystal." The geometrical structure of the first experimentally realized Photonic bandage is sometimes called “Yablonovite.”