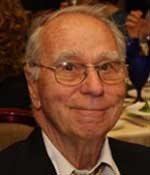 
"For his pioneering development and application of the flowing afterglow technique to provide detailed microscopic understanding of low-energy ion-molecule reactions of importance in weakly ionized gases and in ionospheric physics."


Eldon Earl Ferguson was born at Rawlins, Wyoming, 23 April 1926.  He grew up in Tulsa, Oklahoma, from age 5.  He was Oklahoma cross country track champion (1943) and entered the University of Oklahoma on a track scholarship.  He received his PhD in 1953 doing IR and Raman spectroscopy under Jens Rud Nielsen at Oklahoma.  After a year as a seismologist with Phillips Petroleum, he went to the Naval Research Laboratory where he worked on IR spectroscopy.  In 1957 he became a professor at the University of Texas.  During that time, he spent a year at the Max Planck Institute in Munich as a Guggenheim Fellow.  In 1962, the National Bureau of Standards attracted Ferguson and two of his outstanding PhD students, Fred Fehsenfeld and Art Schmeltekopf to the Boulder, Colorado, laboratories (later, NOAA), joined later by Dan Albritton, where they soon developed the flowing afterglow technique for studies of ion reactions with molecules.  Over time, with the help of many graduate students and postdocs, they mapped out the ion chemistry of the atmosphere, successful to the point that the group eventually had to turn to understanding the related neutral chemistry in order to complete the picture.  Ferguson was adjunct professor of chemistry at the University of Colorado and continually had a hand in developing the department, JILA, and CIRES at the University.  He retired from NOAA in 1986, becoming Directeur de Recherche du CNRS in Orsay, France.  He later returned to NOAA to become director of the new Climate Monitoring and Diagnostics Laboratory, retiring once again in 1995.  He has held Humbolt and Erskine Fellowships.  He received the Presidential Rank Award of the Department of Commerce.  He has been a member of the Fachbeirat-Kosmochemie of the MPI für Kernphysik (Heidelberg).  He presently lives in Paris with his wife, the physicist Marie Durup-Ferguson.