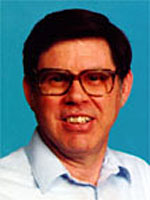 
"For a leading role in milestone advances in the study of the b quark with the CLEO collaboration; particularly the discovery and measurement of b semileptonic decay, the b to s Penguin decay process, and the b to u weak transition. In addition, his contributions led to substantial improvements in understanding the flavor sector of the Standard Model and the Cabibbo-Kobayashi-Maskawa matrix of weak quark couplings."


Dr. Thorndike received his A.B. in physics from Wesleyan University in 1956, his M.S. in physics from Stanford University in 1957, and his Ph.D. in physics from Harvard University in 1960 where he worked with Richard Wilson on nucleon-nucleon scattering at the Harvard Cyclotron Laboratory. After a postdoctoral position at Harvard, he joined the University of Rochester faculty as Assistant Professor of Physics in 1961, and was promoted to Associate Professor in 1965. He was made a Full Professor in 1972. Dr. Thorndike is the author of the book, "Energy and Environment, a Primer for Scientists and Engineers." He held an NSF Predoctoral Fellowship in 1956-60, an NSF Senior Postdoctoral Fellowship in 1970, and a Guggenheim Fellowship in 1987-88. He is a Fellow of the American Physical Society and a member of the Division of Particles and Fields.

Dr. Thorndike's research interests are in the general area of experimental high energy physics. He worked on nucleon-nucleon scattering with the Rochester 130" Cyclotron (1961-67), vector meson photoproduction and decay with the Cornell 10 GeV Electron Synchrotron (1968-78), and e+ e- colliding beam physics with CLEO (1979-86, 1988 - present) and AMY (1987-88). His current research interest is in b quark decay, with emphasis on rare decays and on CKM matrix determination.