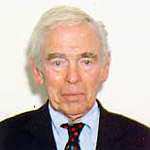 
"For contributions to the theory of magnetically confined plasmas, including fundamental work on the formulation of the MHD Energy Principle and on the foundations of linear and nonlinear gyrokinetic theory essential to the analysis of microinstabilities and transport."


Dr. Edward Frieman is Senior Vice-President, Science and Technology, of Science Applications International Corporation and Director Emeritus and Research Professor at the University of California, San Diego. He received his PhD from the Polytechnic Institute of Brooklyn and held key positions at the Princeton Plasma Physics Laboratory. He was a Professor of Astrophysical Sciences at Princeton University.

He served as the Director of Energy Research at the US Department of Energy and went on to become the Director of the Scripps Institution of Oceanography. He has been an adviser on defense and civilian matters to the government and served on the White House Science Council, the Defense Science Board and the Board on Sustainable Development of the National Research Council.

Frieman is a member of the American Philosophical Society, the National Academy of Sciences, and a fellow of the American Physical Society. He was awarded the Department of Energy Distinguished Service Medal and the Richtmyer Award from the American Physical Society. He received the Distinguished Alumni Award from the Polytechnic Institute of Brooklyn and the Department of the Navy Superior Public Service Award. He has written over eighty scientific papers in the areas of plasma physics, MHD theory, astrophysics, statistical mechanics, hydromagnetics, and oceanography. He now works on the global environment and the science of sustainable development.