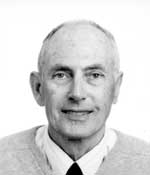 
"For his pioneering contributions to the fundamental understanding of dynamic failure of materials and the incorporation of this understanding into successful theories and models of material response."


Donald Curran is currently a Senior Staff Scientist Emeritus with SRI International headquartered in Menlo Park, California. He received his B.S. in physics from Iowa State College in 1953, and a M.S. and Ph.D. in Physics in 1956 and 1960, respectively, from Washington State University. After receiving his M.S., and during the summers while pursuing his Ph.D., he worked at SRI under the leadership of George E. Duvall. From 1962 to 1967 he worked at the Norwegian Defense Research Establishment near Oslo, Norway, and thereafter at the Ernst Mach Institute in Freiburg, Germany before returning to SRI in 1970. At that time a gifted group of scientists was engaged in the initial stages of developing a new approach to fracture mechanics, which later became known as the NAG/FRAG (Nucleation and Growth to Fragmentation) methodology. He participated with his colleagues during the following 30 years to apply this methodology to measurement and modeling of both dynamic and quasi-static material failure applications. After his retirement, he moved to Oslo. Norway, where he resides when not performing consulting work at SRI. He is a member or past member of the American Physical Society, International Hypervelocity Society, and International DYMAT Association. He is co-recipient of the John Rinehart Award, and is an APS Fellow.