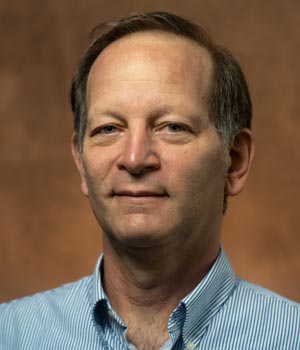 
"For pioneering contributions to the experimental realization of strongly interacting one-dimensional Bose gases and groundbreaking studies of their quantum dynamics, and for contributions to quantum computing with neutral atoms in optical lattices."


David Weiss earned a BA in physics, summa cum laude, from Amherst College in 1985, writing a thesis with Larry Hunter. He was a Churchill Scholar at Cambridge University, and then worked with Steven Chu at Stanford University, receiving a Ph.D in 1993. He did a postdoc with Serge Haroche at the Ecole Normale Superieure in Paris. Weiss returned to the US to take a faculty position at U.C. Berkeley. He moved to Penn State in 2001, where he is now a Distinguished Professor of Physics and Associate Head for Research. Weiss’ experiments primarily involve cold atoms in optical lattices. In 2D lattices, his group studies 1D Bose gases, in which they have realized the Lieb-Liniger model and invented a “quantum Newton’s cradle”. In 3D lattices, the group created the first resolvable arrays of single cold atoms; these atoms are being applied to the field of quantum information. His group also uses 1D lattices as traps for precision measurements, including a search for the permanent electric dipole moment of the Cs atom. Weiss is a Fellow of the American Physical Society (APS) and the American Association for the Advancement of Science. He was an Office of Naval Research Young Investigator, and has held an National Science Foundation CAREER grant, a Sloan Fellowship and a Packard Fellowship. He received the Penn State Faculty Scholar Medal in 2007. He has served the Division of Atomic, Molecular and Optical Physics of the APS in many capacities, including as its Chair in 2015-16.