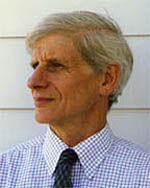 
"For the introduction with J. Michael Kosterlitz of the theory of topological phase transitions, as well as fundamental contributions to our understanding of electron localization and the behavior of spin glasses."


David Thouless was born in Bearsden, Scotland, in 1934, received his secondary education at Winchester College, and was an undergraduate at Trinity Hall, Cambridge. He received the BA degree from Cambridge University in 1955. He worked under Hans Bethe on nuclear matter, and received a Ph.D. from Cornell in 1958. He did postdoctoral work in Berkeley and, with Rudolf Peierls, in Birmingham.

After four years at Cambridge, he was Professor of Mathematical Physics at Birmingham University from 1965 to 1978 where he collaborated with Michael Kosterlitz, and also worked on electron localization and the spin glass. Since 1980, he has been Professor of Physics at the University of Washington in Seattle, where his main interests have been in the Quantum Hall effect, in vortices in superfluids, and in other problems related to topological quantum numbers.

He is the author of Quantum Mechanics of Many-Particle Systems, first published in 1961, and of Topological Quantum Numbers in Nonrelativistic Physics, published in 1998.