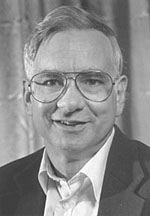 
"For groundbreaking studies of coherent atom optics and pioneering work on laser cooling and trapping of atomic gases."


David E. Pritchard graduated from Caltech (B.Sc. 1962) and Harvard (Ph.D. 1968), and has been employed at MIT since 1966. He has studied van der Waals molecules (NaNe and KAr), two-photon spectroscopy, line broadening, and atom-molecule collisions. His pioneering observation of the Kapitza-Dirac effect and Bragg scattering of atoms opened the field of atom optics and led to his group's development of nanofabricated diffraction gratings for atoms with which they made a versatile atom interferometer. His group also does interferometry experiments with BEC's. His group invented the widely used magneto-optical laser trap and the Dark Spot MOT. His group operates the world's most accurate mass spectrometer that now compares the masses of two individual trapped ions of different species. With his son, he wrote the online Mastering Physics tutorial and homework service by Addison Wesley.