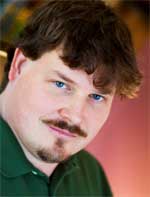 
"For wide-ranging studies of fundamental symmetries in atoms and molecules, including novel approaches to searches for the electric dipole moment of the electron and investigations of parity nonconservation and the spin-statistics connection."


David DeMille received his A.B. in Physics from the University of Chicago in 1985, and his Ph.D. in Physics from the University of California, Berkeley in 1994. After postdoctoral research at Lawrence Berkeley National Lab, he joined the faculty at Amherst College in 1997, then moved to Yale University in 1998. He has received fellowships from the Packard Foundation and Sloan Foundation, and the Cottrell Scholars, Research Innovation, and Cottrell College Science Awards from the Research Corporation. He was elected a fellow of the American Physical Society in 2005. DeMilles recent research focuses on use of diatomic molecules as a resource in several subfields. For example, the small spacing between energy levels in molecules can enhance small symmetry-violating effects. DeMille is using these enhancements in experiments to study the electric dipole moment of the electron; nuclear anapole moments and semileptonic electroweak couplings; and possible time variation of the electron-to-proton mass ratio. In parallel with these efforts, he is developing techniques to cool and trap polar molecules, and investigating applications of ultracold molecules in precision measurement and quantum information processing.