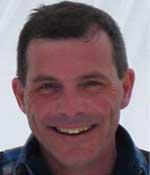 
"For innovative and wide-ranging contributions to the statistical physics of disordered systems, including but not limited to random magnets, sliding charge density waves, and vortices in superconductors."


Daniel S. Fisher was born in London in 1956, received a BA from Cornell in 1975, and a PhD from Harvard in 1979. After a decade at Bell Labs, he joined the faculty at Princeton and subsequently at Harvard. Currently he is Professor of Applied Physics and, by Courtesy, of Biology and of Bioengineering at Stanford.

Trained as a condensed matter theorist, Fisher's research has included lowdimensional systems, superconductivity, the effects of randomness on phase transitions and dynamics in disordered materials, and fracture and friction from laboratory scales to earthquakes. In recent years he has focussed on biology, mostly trying to develop quantitative understanding of the dynamics of evolutionary processes, with forays into cellular biophysics. Fisher has served on the boards of the Union of Concerned Scientists and Common Cause, and as chair of the National Security Subcommittee of the APS Panel on Public Affairs. He is a Fellow of the APS and the American Academy of Arts and Sciences. For their joint work on spin glasses, David Huse and he received an Exceptional Contribution Award from AT&T Bell Laboratories.