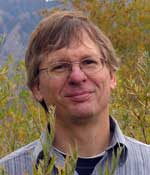 
"For seminal contributions to theoretical AMO physics, including dissociative recombination, ultracold matter, and high-harmonic generation, and for the prediction of 'trilobite' long-range molecules."


Chris Greene has been a Fellow of JILA and Professor of Physics at the University of Colorado at Boulder since 1989.  His doctorate in theoretical atomic physics was earned in 1980 from the University of Chicago, under his advisor Ugo Fano.  His undergraduate degree was in math and physics from the University of Nebraska-Lincoln in 1976, with an honors thesis supervised by Donal Burns.  A one-year postdoctoral stint in Richard Zares group at Stanford was then followed by 7.5 years on the faculty at Louisiana State University.

Other awards he has received to date include the 1991 I. I. Rabi Prize of the American Physical Society, a Visiting Miller Professorship at the University of California-Berkeley in 2007, and an Alexander von Humboldt Award for Senior U.S. Scientists in 2007.  He was also an NSF Presidential Young Investigator and an Alfred P. Sloan Foundation Fellow.