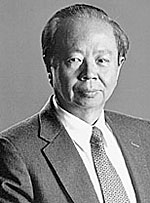 
Dr. Tsuei received his BS from National Taiwan University and his Ph.D in Materials Science from the California Institute of Technology. After seven years on the faculty of Caltech, Dr. Tsuei joined the IBM T. J. Watson Research Center in 1973. He held several research management positions in its Physical Sciences Department and is currently a research staff member devoting his full time to the fundamental study of superconductivity and related topics. He was appointed to the position of Invited Professor at the Universite Paris-Sud (Orsay, France) in 1996 and 1997.

In his early research career, Dr. Tsuei made pioneering contributions to the study of electrical and magnetic properties of various glassy metals, including amorphous superconductors and ferromagnets. He and his co-workers demonstrated the existence of ferromagnetism in bulk non-crystalline alloys obtained with the technique of quenching from the liquid state. Through his work on ferromagnetism, the Kondo effect, and the Mössbauer effect in amorphous metallic alloys, he contributed to the understanding of the nature of long-range magnetic order in structurally disordered materials. He invented an in-situ process for making multi-filamentary superconducting composite wires (also known as Tsuei wires). These microscopically inhomogeneous superconductors have been used as a model system for studying proximity effect and percolation phenomena.

His current research interests include the mechanism responsible for high-temperature superconductivity, and phase-sensitive tests of pairing symmetry in unconventional superconductors using crystals with controlled orientations.

Dr. Tsuei was a recipient of the Max Planck Research Prize in 1992. He was awarded an Outstanding Innovation Achievement Award from IBM in 1995 and an Academic Achievement Award from the Chinese American Academic and Professional Society in 1996 for his contribution to the work on tricrystal tests of pairing symmetry in high-Tc superconductors. He has been a Fellow of the APS since 1974. He was elected to the Academia Sinica in 1996.