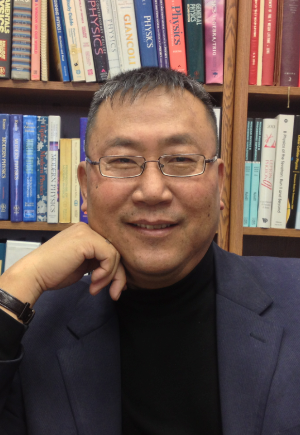 
"For outstanding contributions and leadership in experimental neutrino physics, and for outstanding teaching and outreach, especially on the physics of sports."


Chang Kee Jung is a SUNY Distinguished Professor at Stony Brook University and a fellow of American Physical Society and American Association for the Advancement of Science. Jung founded the Stony Brook Nucleon decay and Neutrino (NN) research group in 1991 to study neutrino properties and search for proton decays. He and the NN group participated in various ground breaking projects, including: Super-Kamiokande, the experiment that made a historic discovery of the neutrino oscillation phenomenon which resulted in a Nobel Prize in Physics in 2015; K2K, the first accelerator-based long-baseline neutrino oscillation experiment; and T2K, the long-baseline neutrino oscillation experiment that discovered appearance of electron neutrinos from a muon neutrino beam. He shared the 2016 Breakthrough Prize in Fundamental Physics with his collaborators in these experiments. Currently, Jung continues his work on T2K and participates in the US-based DUNE experiment, which is expected to discover charge-parity symmetry violation in the lepton sector. Jung actively sought to teach physics to non-science majors and the general public. Notably, he introduced "Light, Color and Vision" course at Stony Brook, and developed an entirely new course "Physics of Sports". He has been interviewed by numerous media outlets for his expertise in particle physics and physics of sports. Jung received his B.S. degree from Seoul National University in 1979 and his Ph.D. degree from Indiana University in 1986.