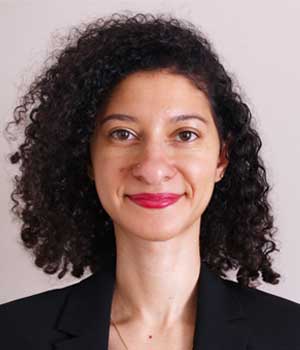 
"For contributions to theoretical cosmology and particle physics, ranging from axion physics to models of inflation to alternative models of dark energy, for tireless efforts in increasing inclusivity in physics, and for co-creating the Particles for Justice movement."


Chanda Prescod-Weinstein (she/they) is an assistant professor of physics and core faculty in women’s and gender studies at the University of New Hampshire. Born and raised in the El Sereno neighborhood of east Los Angeles, Dr. Prescod-Weinstein holds an AB in physics, astronomy, and astrophysics from Harvard College; an MS in astronomy and astrophysics from UC Santa Cruz; and a PhD in physics from the University of Waterloo. She conducted her dissertation research at the Perimeter Institute and has held named fellowships at NASA and MIT. Dr. Prescod-Weinstein's research interests include theoretical work on early universe cosmology, wave dark matter phenomenology, neutron stars, and large scale structure formation. She is a member of the Vera C. Rubin Observatory Dark Energy Science Collaboration and its Dark Matter Working Group and is a topical convener for the 2021 Snowmass Particle Physics Community Planning Exercise. Dr. Prescod-Weinstein also actively works on research in Black feminist science, technology, and society studies. She currently serves on the APS Forum on the History of Physics executive and was a founding executive member of the AAS Committee on the Status of Sexual-Orientation and Gender Minorities in Astronomy. Dr. Prescod-Weinstein is one of under 100 Black American women to earn a PhD from a department of physics. Her book, The Disordered Cosmos: A Journey into Dark Matter, Spacetime, and Dreams Deferred, will be published March 9, 2021.