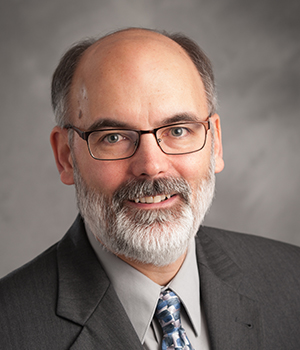 
"for his scientific leadership in the development and utilization of instruments and techniques for discovery and exploration of exotic nuclei, and for his community leadership in elucidating the physics of rare isotope beams and advancing the realization of the Facility for Rare Isotope Beams facility."


Bradley M. Sherrill received his B.A. from Coe College in Cedar Rapids, Iowa, in 1980. He earned his M.S. in 1982 and his Ph.D. in 1985, both in physics, from Michigan State University. He moved to a postdoctoral appointment at GSI in Germany. In 1986 he joined the staff of the National Superconducting Cyclotron Laboratory (NSCL) and in 1991, became an assistant professor of physics at Michigan State University, where he is now a distinguished professor of physics. He now directs the National Superconducting Cyclotron Laboratory, and is the scientific director at the Facility for Rare Isotope Beams, which he helped develop. His research addresses the production and study of rare isotopes and their role in the universe. He led the design and construction of the A1200 fragment separator at NSCL, was project manager for construction of the S800 spectrometer, and helped design the A1900 fragment separator there. Winner of the 1986 Division of Nuclear Physics Dissertation Award and the 2014 DNP Distinguished Service Award, Professor Sherrill also chaired the DNP in 2005. He has served on advisory committees for many laboratories around the world and the Nuclear Science Advisory Committee to the Department of Energy and the National Science Foundation. Professor Sherrill is a fellow of the American Physical Society and Fellow and the American Association for the Advancement of Science.