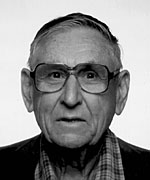 
"In recognition of their pioneering experimental investigations of molecular and planetary fluids using shock compression."


William J. Nellis received his BS from Loyola University of Chicago in 1963 and his PhD from Iowa State University in 1968, both in physics. He was a postdoctoral researcher at Argonne National Laboratory from 1968-1970, and then became an assistant professor at Monmouth College (IL). In 1973, he joined Lawrence Livermore National Laboratory, where he has remained to the present.

Arthur C. Mitchell received his BS in physics from Pasadena College (now called Point Loma Linda College) in 1957 and has been a physicist at Lawrence Livermore National Laboratory since then.

Physical properties of condensed matter both during and after high-pressure shock compression are their research interests. Shock pressures are produced by impact of a hypervelocity projectile onto a sample holder. Projectile velocities up to 8 km/s are achieved with a two-stage light-gas gun. Properties measured are electrical conductivities, optical emission temperatures, equation-of-state data, shock-wave temporal profiles, and phase transitions. Also, solids are recovered from shock pressures in the range 0.01-1 Mbar for characterization of physical properties and material structures.

Their data on molecular and planetary fluids at high pressures and temperatures represent the bulk of all experimental data in this regime. The highlight is the recent electrical conductivity measurements showing that fluid hydrogen becomes metallic at 1.4 Mbar and nine-fold compression of initial liquid density.

Nellis and Mitchell are members of the APS. Nellis is a fellow of the Divison of Condensed Matter Physics and past chairman of the Topical Group on the Shock Compression of Condensed Matter. He is also a member of the American Association for the Advancement of Science, the Materials Research Society, the American Geophysical Union, and the Hypervelocity Impact Society.