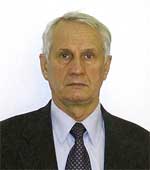 
"For establishing a center for scientific study of arms control, for landmark analyses, and for courage in supporting open discussion of international security in Russia."


Anatoli Diyakov is Professor of Physics at the General Physics Department, the Moscow Institute of Physics and Technology (MIPT). He was a graduate of the MIPT and did his graduate work in laser physics at the Lebedev Institute, earning his MS in 1972. Diyakov received his Ph.D. from MIPT in 1975. His dissertation studied gas-dynamic lasers with combustion of solid-propellant fuel. In 1975 Diyakov joined the staff of the General Physics Department of MIPT, where he teaches general physics. He has also carried out research in the field of the microscopic dynamics of elementary processes in gases.

In 1991, jointly with Frank von Hippel from Princeton University, he established the Center for Arms Control, Energy and Environmental Studies at MIPT. The Centers task is to study technical aspects of nuclear arms control and non-proliferation issues and facilitate an informed debate on arms control, disarmament, non-proliferation and military policy. Among the research projects carried out by the Center were studies of problems associated with strategic nuclear arms reduction, weapons-grade fissile material production and disposal, technical aspects of various missile defense programs, questions related to vulnerability of strategic submarines, problems of decommissioned submarines disposal, the role of high-precision conventional weapons, and others. Diyakov has been the Director of the Center since its establishment. He has been a visiting scholar at Princeton University and MIT. Diyakov is a member of the Russian nuclear society and a member of the International Panel on Fissile Material.