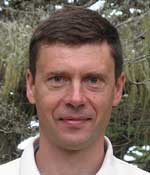 
Alexei Kitaev, Ph.D., graduated from the Moscow Institute of Physics and Technology (Russia) in 1986 having worked with quasicrystals. He did his doctoral studies at the Landau Institute for Theoretical Physics (Chernogolovka, Russia) under the supervision of Valery Pokrovsky, Ph.D., receiving his Ph.D. in 1989. Dr. Kitaev is currently the Ronald and Maxine Linde Professor of Theoretical Physics and Mathematics at the California Institute of Technology (Pasadena). Dr. Kitaev is the recipient of the 2008 MacArthur “Genius” Award, the 2012 Fundamental Physics Prize, and the 2015 Dirac Medal. Dr. Kitaev’s most cited work was the idea of topological quantum computation, namely, that quantum information can be protected from errors by encoding it in a many-body system with nontrivial topological properties. The original scheme was based on anyons, but later Dr. Kitaev proposed the use of Majorana modes. He devised and studied a few exactly solvable quantum models, including the Majorana chain and a system of spins on the honeycomb lattice. He also proposed the mathematical classification of topological insulators and superconductors using Bott periodicity. Dr. Kitaev is currently working on another model of interacting fermions, which exhibits emergent behavior similar to quantum gravity.