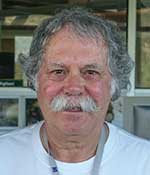 
"For the development of Resonant Ultrasound Spectroscopy, used to study lattice and electronic phenomena in condensed matter physics, solving problems as diverse as the elastic properties of plutonium, to finding that the pseudogap state of cuprates is indeed a thermodynamic phase."


Albert Migliori received his B. S. in physics in 1968 from Carnegie Mellon University in 1968, his M. S. and Ph.D. in physics from the University of Illinois at Urbana-Champaign in 1970 and 1973. He is co-discoverer of acoustic heat engines, director of the Seaborg Institute for Actinide Science at Los Alamos National Laboratory, and is a leading expert in the use of resonant ultrasound spectroscopy as a solid-state physics tool. His current research interests include elasticity of Pu, thermodynamics of superconductors, and state-of-the-art research and development of new measurement techniques for high magnetic fields. He holds 25 patents, is the author of about 160 publications, six book chapters, and one book. Migliori received the RD100 Award in 1991 and 1994 and a Federal Laboratory Consortium Award for Excellence in Technology Transfer in 1993. He is a fellow of the Los Alamos National Laboratory, the American Physical Society, the American Association for the Advancement of Science, and the Acoustical Society of America.