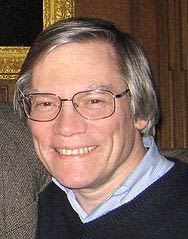 
"For his concept of the inflationary universe which has revolutionized the way in which cosmologists think about the earliest moments of the universe. The clarity of his presentations, both written and spoken, have made his important ideas accessible to expert and layman alike."


Professor Alan Guth was born in New Brunswick, New Jersey, in 1947. He grew up and attended the public schools in Highland Park, NJ, but skipped his senior year of high school to begin studies at the Massachusetts Institute of Technology. He remained at MIT from 1964 to 1971, acquiring S.B., S.M., and Ph.D. degrees, all in physics. His Ph.D. thesis, done under the supervision of Francis Low, was an exploration of an early model of how quarks combine to form the elementary particles that we observe.

During the next nine years, Guth held postdoctoral positions at Princeton University, Columbia University, Cornell University, and the Stanford Linear Accelerator Center (SLAC), working mostly on rather abstract mathematical problems in the theory of elementary particles. While at Cornell, however, Guth was approached by a fellow postdoctoral physicist, Henry Tye, who persuaded Guth to join him in studying the production of magnetic monopoles in the early universe. This work changed the direction of Guth's career. The following year at SLAC he continued to work with Tye on magnetic monopoles. They found that standard assumptions in particle physics and cosmology would lead to a fantastic overproduction of magnetic monopoles, a conclusion that was reached slightly earlier by John Preskill, then at Harvard (now at Caltech). Guth and Tye began a search for alternatives that might avoid the magnetic monopole overproduction problem, and from this work Guth invented a modification of the big bang theory called the inflationary universe.

The following September (1980), Guth returned to MIT as an associate professor. Guth has since been elected to the National Academy of Sciences and the American Academy of Arts and Sciences, and has been awarded the MIT School of Science Prize for Undergraduate Teaching (1999), the Franklin Medal for Physics of the Franklin Institute (2001), and the Dirac Prize of the International Center for Theoretical Physics in Trieste (2002). He is now the Victor F. Weisskopf Professor of Physics and a Margaret MacVicar Faculty Fellow at MIT.