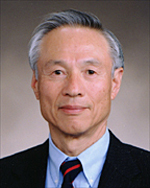 
"For innovative discoveries and seminal contributions to the theories of nonlinear drift wave turbulence, Alfvin wave propagation in laboratory and space plasmas, and optical solitons and their application to high speed communication."


Dr. Hasegawa is a native of Japan, graduating from Osaka University with a B. Eng. and a M. Eng. degree in 1957 and 1959 respectively. As a Fulbright scholar, he received his Ph.D. from the University of California, Berkeley in 1964 on his work on plasma physics. In 1967, he received a Doctor of Science degree from the Nagoya University. He was an Associate Professor at Osaka University from 1964 until he joined Bell Laboratories in Murray Hill, NJ in 1968. He returned to Osaka University in 1991 as a Professor of Communications Engineering. Upon retirement from Osaka University in 1998, Dr. Hasegawa was appointed to Research Professor at Kochi University of Technology and as a consultant at NTT Science and Core Technology Laboratory Group. Currently, he is a Lecturer at Kobe Womens University (where he teaches a course entitled "Theory of Happiness for Women") and a Professorial Advisor to the President, Himeji Dokkyo University.

Dr. Hasegawa was the Chair of the APS Division of Plasma Physics in 1990 and the Chair of the Executive Committee of Laser, Quantum Electronics Institute of Electronic Information and Communication Engineers in 1994. Currently he is a member of the Planning Committee of the Kansai Science Forum. In 1996 he initiated and chaired the ten year project "STAR-Soliton based Total-All optical communications Research" of the Japanese Ministry of Post and Telecommunication. During 1998-1999, he also initiated and chaired the two year project, "Research and Development of New Node Technology" sponsored by the Ministry of Industry and Trade.