Oak Ridge National Laboratory (ORNL), located in Oak Ridge, Tennessee is one of the most important US Department of Energy (DOE) research facilities, and a shining example of how inventive, collaborative science can lead to transformative solutions for humankind. Originally commissioned in 1943 as part of the Manhattan Project, it has grown to employ over 4500 people, including leading scientists and engineers in over 100 disciplines, who have garnered hundreds of patents for their innovations. ORNL supports the DOE’s national missions of scientific discovery, clean energy, and security, including the development and deployment of original science-based security technologies to make the world a safer place, but its scientific contributions are especially known in the fields of neutron science and engineering, advanced computing, materials research and development, and nuclear physics and engineering.i

Its history is a storied one, as the Lab’s original mission was to separate the chemically indistinguishable U235 from U238, to provide highly enriched uranium for one of the atomic bombs (dubbed "little boy") that Oppenheimer and his team were designing in New Mexico. In the years since its birth, ORNL continues to contribute innovations and to expand knowledge in new realms. For example, it has a Joint Institute for Biological Sciences which supports research in complex bioenergy and bioenvironmental systems. It serves as the home of DOE’s BioEnergy Science Center.ii

Given the important role in the history of atomic energy and physics, ORNL could have been honored multiple times by the APS as part of its APS Historic Sites Initiative. As 2016 APS President-elect Laura Greene noted, "It is fitting that, as one of the great US national laboratories, with a history going back to the Manhattan Project during World War II, Oak Ridge takes its rightful place alongside Los Alamos, Brookhaven, SLAC, the Lawrence Radiation Lab and Fermilab in the APS register of historic sites. Indeed, the leading role that Oak Ridge has played in American physics continues at such facilities as the Spallation Neutron Source, the High Flux Isotope Reactor, and the Center for Nanophase Materials Sciences."

But there is even more to ORNL and on July 25, 2016, Greene marked the historical designation of a particular site-within-the-site, a physics research facility that is now decommissioned, but whose achievements are of historic significance. Constructed in the mid-1990s, the Holifield Radioactive Ion Beam Facility was the successor to, and incorporated elements of, two earlier machines, the Oak Ridge Isochronous Cyclotron (ORIC) and the Holifield Heavy Ion Research Facility. Taken together, these facilities provided unique accelerated beams of light ions, heavy ions, and short-lived radioactive nuclei for nuclear structure and reaction studies, astrophysics research, and interdisciplinary applications.

And so on that summer day, Greene presented a plaque to ORNL Deputy for Science and Technology Thomas Zacharia to honor the induction of ORNL’s Holifield Radioactive Ion Beam Facility into the annals of physics history and its designation as an APS Historic Site. The plaque reads: "At this site, the Holifield Radioactive Ion Beam Facility (HRIBF) at Oak Ridge National Laboratory, researchers have conducted pioneering experiments using accelerated beams of radioactive nuclei to probe nuclear structure and investigate nuclear reactions that govern astrophysical processes. Important results have included early measurements with reaccelerated unstable beams, the first acceleration of neutron-rich fission fragments, and confirming the doubly magic nature of the heavy tin isotope 132Sn."

"The Holifield Facility is an ORNL landmark in many ways, from the iconic tower for the tandem accelerator to the groundbreaking scientific results obtained there and published," said Zacharia. "We are very honored by the American Physical Society's recognition."

Placed into operation in 1962, the ORIC was one of the world’s first cyclotrons to exploit azimuthally varying field focusing. It provided a wide variety of particle beams for nuclear physics and chemistry experiments.

In the 1970s, ORNL added the 25-million volt Tandem Electrostatic Accelerator and the ORIC was reconfigured to serve as a booster accelerator. In 1980, the resulting Holifield Heavy Ion Research Facility — named for U.S. Rep. Chet Holifield, an atomic energy advocate — was identified as a DOE national user facility to provide more than 70 ion species for researchers worldwide.

Growing interest in research using beams of short-lived radioactive ions led to another reconfiguration of the facility, with the ORIC serving as a driver accelerator to produce radioactive ion species that were then injected into and accelerated by the 25-MV tandem. The new configuration, opened in 1997, was renamed the Holifield Radioactive Ion Beam Facility (HRIBF).

Through world-leading isotope separation developments, the HRIBF provided high-quality beams of 200 rare isotopes. More than 50 of these were produced at world-record intensity.

The exceptional scientific and technical abilities of the HRIBF staff and instrumentation enabled ground-breaking achievements including the first measurement with a reaccelerated unstable beam in North America, the first acceleration of neutron-rich fission fragments leading to the confirmation of the doubly magic nature of the heavy tin isotope 132Sn, pioneering experiments on the giant quadrupole resonance in nuclei, and dramatic new insights into numerous nuclear reactions that drive the evolution of the cosmos.

The Holifield Facility was placed in shutdown status in 2012, which marked its 50th year of operation.iii

"I want especially to highlight the confirmation of the doubly magic nature of the heavy isotope tin 132 (132Sn), a tour-de-force experiment that brought HRIBF well-deserved recognition in the broader community, including the cover story in the August 2010 issue of Physics Today," said Greene, in her remarks. 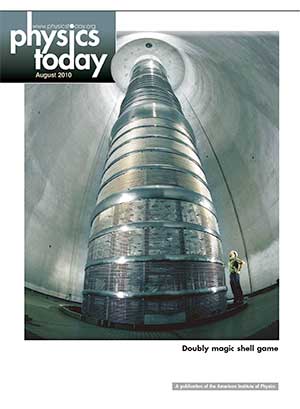 The 25 MV Tandem Electrostatic Accelerator at the Holifield Facility, as pictured on the August 2010 cover of Physics Today.