Ernest Orlando Lawrence and Milton Stanley Livingston worked together at the University of California at Berkeley to build cyclotrons that Lawrence had invented. The cyclotron was a revolutionary particle accelerator built to probe the atomic nucleus with high-energy protons. In 1939, Lawrence was awarded the Nobel Prize for his invention. On December 10, 2007 the APS presented a plaque to the Berkeley physics department in their honor.

Born in Canton, South Dakota on August 8, 1901, Lawrence received his PhD from Yale in 1925, and taught there until the University of California at Berkeley lured him away in 1928. Two years later he became the youngest full professor in Berkeley history. He remained at Berkeley for the rest of his life.

Milton Stanley Livingston was born in Broadhead, Wisconsin, on May 25, 1905. At Berkeley in the summer of 1930 he canvassed the professors of the Physics Department to look for a Ph.D. topic and chose one suggested by Lawrence.

Lawrence wanted to find a way to accelerate particles in order to understand the nucleus, and in the spring of 1929 he came up with a new idea. He found a paper that explained how to use the same electrical potential twice, doubling the energy by switching from positive to negative potential in order to push ions and then to pull them. Livingston's thesis topic was to experimentally verify if an applied voltage could lead to a large final energy when you had moving ions.

Lawrence designed a machine that would accelerate ions in a spiral path between two D-shaped electrodes. Livingston did much of the work of translating the idea into working hardware. This was the "magnetic resonance accelerator" - the cyclotron. Under Lawrence's supervision, Livingston built a small working model. It was 4.5 inches in diameter and could accelerate hydrogen ions up to energies of 80,000 electron volts. The two of them then created a 10-inch model that created energy in excess of 1 million electron volts.

Describing the events of January 9, 1932, Livingston is quoted saying: "I recall the day when I had adjusted the oscillator to a new high frequency, and, with Lawrence looking over my shoulder, tuned the magnet through resonance. As the galvanometer spot swung across the scale, indicating that protons of 1-MeV energy were reaching the collector, Lawrence literally danced around the room with glee. The news quickly spread through the Berkeley laboratory, and we were busy all that day demonstrating million-volt protons to eager viewers."

The cyclotron was one of the earliest types of particle accelerators, and is still used as the first stage of some large multi-stage particle accelerators. It makes use of the magnetic force on a moving charge to bend moving charges into a semicircular path between accelerations by an applied electric field. The applied electric field accelerates charged particles between the two D-shaped electrodes of the magnetic field region. The field is reversed at the cyclotron frequency to accelerate the charged particles back across the gap.

For his invention and development of the cyclotron, Lawrence was elected to membership in the National Academy of Sciences, in 1934, and in many other scientific societies; in addition, he received numerous medals, honorary degrees, and other distinctions, the highest of which was the Nobel Prize of 1939.

Livingston was elected to the National Academy in 1970. He died in 1986, after a career that had taken him from Berkeley to Cornell, MIT, Brookhaven and Fermilab. 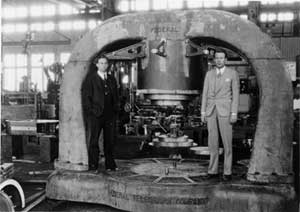 Livingston (left) and Lawrence (right) with magnet of their 37-inch cyclotron.