It’s named after a President, was funded by an “anonymous donor”, and became the first major instructional teaching laboratory associated with a university physics department in the United States. It’s the Jefferson Laboratory at Harvard University, and on April 27, 2009, as part of the APS historic sites initiative, APS President Cherry Murray presented a plaque to Harvard President Drew Gilpin Faust on behalf of the institution to commemorate the significance of the lab. The citation on the plaque reads “In recognition of the Jefferson Physical Laboratory, dedicated in 1884, as the oldest university building erected in America to pursue physics research, and for the many scientific advances made by its faculty.” 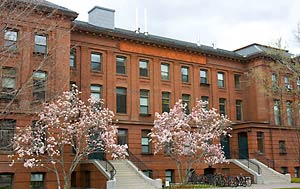 The Jefferson Laboratory, although credited with helping to further the study of physics and the important interconnection between research and higher education, almost didn't exist at all. In 1869, then Harvard President Charles W. Eliot announced that "the prime business of American professors in this generation must be regular and assiduous class teaching."He supported a liberal education that embraced science, but did not recognize the critical role that research played in the educational experience.2 At the time, most laboratory science was almost completely confined to being taught at focused technical schools, such as Harvard's Lawrence Scientific School. The university’s sole physics professor, Joseph Lovering, did nothing to dissuade Eliot from his convictions.3

But the atmosphere changed when, in 1870, John Trowbridge became an assistant professor of physics and challenged the President about the implication of research to the future of physics. "The department of physics in a University must embrace both teaching and investigation,” he stated in 1877. “If it is given up entirely to teaching, the cause of science suffers, and the object of a University which is founded both to teach and increase the sum of human knowledge is defeated."4

By 1880, Eliot stood in agreement with Trowbridge that physics instruction “should not be by rote and from books, but in the laboratory, ‘with objects and instruments in hand’” and, should include the pursuit of original research.5 Planning for a new building to encompass these principles was soon underway, thanks in part to an anonymous benefactor, who offered $115,000, with the caveat that another $75,000 would have to be raised. This “friend of the University” was later revealed to be Boston business leader and Harvard alumnus Thomas Jefferson Coolidge, the great-grandson of the third President of the United States and an avid patron of science.6 The building opened in 1884.

Since its genesis, Jefferson Laboratory has demonstrated to be a breeding ground of some of the world’s foremost physics discoveries. The famous Pound-Rebka experiment that confirmed one of the predictions of General Relativity (that gravity can change light's frequency) was conducted in one of the towers of the Laboratory.7 Thanks to the lab, Harvard’s reputation as a top physics department was cemented and continues to grow; of the 43 Nobel Prizes received by the university’s faculty, nearly ¼ are held by current or former physics professors.8

The Laboratory also holds a special place in the history of higher education in America. “We’re here celebrating not just this laboratory,” said Faust at the commemoration, “but the founding of the concept of the research university.”9