On July 13, 2005, APS presented the first historic physics site plaque to the Franklin Institute in Philadelphia, in recognition of the scientific achievements of Benjamin Franklin. This was the first plaque to be presented as part of the ongoing APS historic sites initiative. In addition to his roles as statesman, diplomat, publisher, inventor and entrepreneur, Franklin gained great fame for his scientific work, especially the study of electricity.

Benjamin Franklin was born in Boston in 1706 to a father who originally intended him to enter the clergy. Although his family could only afford to send Franklin to school for a year, he was an avid reader and soon apprenticed to his brother James, a printer.

Like many of Franklin’s later inventions, which were created to make life easier, his first was to help his older brother John, who had kidney stones. Ben developed a flexible urinary catheter that appears to have been the first one produced in America. But his relationship with his brother James was not as friendly, and Ben was forced to escape his abusive brother to go to Philadelphia.

Once in Philadelphia, Franklin began his scientific life in earnest. His interests were wide and varied, and included most things in his daily life. For instance, in 1743, he observed that storms did not travel in the direction of the wind. He began attempts at predicting storm courses, which he put in his Almanac. He also charted the Gulf Stream, giving it the name by which it’s still known today. In 1743, Franklin also founded the American Philosophical Society to give scientific-minded individuals a place to discuss their theories.

In the early 1750’s he turned to the study of electricity. His observations, including his kite experiment, which established the nature of lightning as a form of electricity, brought Franklin international fame.

By the end of the 18th century, scientists believed that electrical and magnetic phenomena could be explained as weightless fluids that acted upon objects at a distance. Attraction and repulsion of electrically charged bodies were believed to arise be from separate electrical fluids.

Franklin proposed that “vitreous” and “resinous” electricity were not produced by different types of “electrical fluid”, but that only a single electrical fluid flowed from one type of body to the other. He was the first to label charged bodies as positive and negative respectively, and he was the first to discover the principle of conservation of charge.

In 1750 he published the experiment for which he is most remembered, a proposal to prove lightning was electrical. It is not clear that he ever carried it out, and the popular image of Franklin holding a flying kite in the rain could well have been lethal. On May 10, 1752, however, Thomas François Dalibard of France successfully conducted the experiment, not with a kite but with a 40-foot tall iron rod that had been carefully insulated, with which he extracted sparks from a cloud as a thunderstorm passed overhead. Others, such as Prof. George Wilhelm Richmann in St. Petersburg, Russia, were not so lucky. Richmann was electrocuted not long after Franklin’s publication of the experiment.

Franklin’s electrical experiments led to his invention of the lightning rod. He noted that conductors with a sharp rather than a smooth point were capable of discharging silently, and at a far great distance. As lightning is created when a charged storm cloud discharges, Franklin decided a pointed rod could be used to protect buildings. Following experiments on his own house, lightning rods were installed on various buildings, such as the Academy of Philadelphia and the Pennsylvania State House (Independence Hall).

Franklin received the Royal Society’s Copley Medal in 1753 for his work in electricity. The cgs unit of electric charge has been named after him: one franklin (Fr) is equal to one statcoulomb. 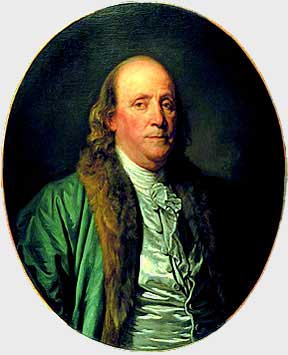 Presentation of the Franklin Plaque: Shown here (l-r) are John Rigden of Washington University, the Chair of the Historic Sites selection committee, Philip W. Hammer, Vice President of the Franklin Institute, and Alan Chodos, Associate Executive Officer of the APS.