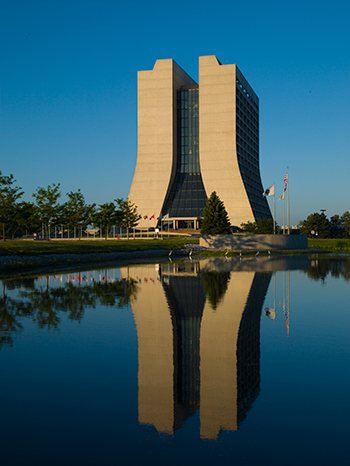 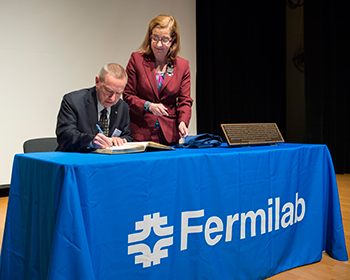 The U.S. Department of Energy's Fermi National Accelerator Laboratory, or Fermilab as it is affectionately known, is located in Batavia, Illinois and is named after Italian physicist Enrico Fermi, the 1938 Nobel Laureate in physics, whose accomplishments spanned the fields of quantum theory, nuclear and particle physics and statistical mechanics. Since its founding in 1967, under the leadership of its first director, Robert R. Wilson, the 6,800-acre site has& been the birthplace of many significant achievements. Fermilab scientists have discovered the bottom quark, one of 12 known elementary particles that make up the fabric of the universe, the top quark, and the tau neutrino, the long-theorized third type of this ghostly, mysterious particle.

Fermilab researchers have been at the forefront of many other important discoveries, including that of the long-sought Higgs boson, found by the CMS and ATLAS collaborations on the Large Hadron Collider at CERN in Switzerland in 2012. More than 100 Fermilab scientists work on the CMS experiment at CERN, and the laboratory serves as the U.S. hub for that experiment, supporting roughly 1,000 university scientists.

Fermilab's current and future physics program includes experiments to unravel the mysteries of the neutrino over long and short distances, experiments to better understand the properties of particles called muons, and an effort to crack the enigma of dark energy, the force believed to be pushing the universe apart faster and faster. Fermilab is also involved in the hunt for the elusive dark matter, which makes up a quarter of our known universe.

So it should come as no surprise that, on a sunny summer day in 2015, the American Physical Society recognized Fermilab for its nearly five decades of contributions to high-energy physics, under the APS Historical Sites Initiative. In a ceremony held 10 June, Laura Greene, vice president of APS, presented Fermilab Director Nigel Lockyer with a plaque commemorating the lab's official status as a Historic Site. The plaque reads:

"In recognition of Fermi National Accelerator Laboratory (Fermilab) for its pivotal contributions to high-energy physics, including the discoveries of the bottom and top quarks and the tau neutrino, key components of the Standard Model. Honoring the achievements of Robert R. Wilson, who helped design and establish the lab in 1967 and served as its first director, and Nobel Laureate Leon M. Lederman, who served as its second director and helped inaugurate the Tevatron, the world's highest energy proton-antiproton collider with the pioneering use of superconducting magnets."

Fermilab produced its first high-energy particle beam on 1 March 1972. Since then hundreds of experiments have used Fermilab's accelerators to study matter at ever smaller scales and its detectors to study the universe at great distances. The Tevatron, a four-mile-around particle collider, was the laboratory's flagship physics machine for 25 years. Today Fermilab is the leading facility for particle physics research in the United States, drawing thousands of scientists to the region to work on experiments, and, as of 2010, contributing more than $643million in total economic output in the state of Illinois alone.

The discovery of the bottom quark took place under the leadership of physicist and Nobel Laureate Leon Lederman. In 1977, he designed an experiment which provided the first evidence for the existence of the bottom quark, an essential ingredient in the theoretical framework called the Standard Model. Using a fixed-target experiment, the collaboration discovered a particle, which they called an upsilon. It was composed of a previously unobserved kind of quark, the bottom quark, and its antimatter partner, the antibottom quark. The bottom quark was then the heaviest subnuclear particle ever observed, weighing in at 10 times the mass of a proton. Physicists at Brookhaven National Laboratory and SLAC National Accelerator Laboratory had in 1974 discovered particles made up of charm quarks and their antimatter partners, anticharm quarks. The discovery of the bottom quark provided important proof of the speculation that all matter is made up of quarks.

And almost two decades later, on 4 July 2012, scientists on two international experiments at the Large Hadron Collider at CERN laboratory announced the discovery of the Higgs boson by combining signals seen in different types of decays of the discovered boson. The discovery was the culmination of nearly five decades of work by thousands of physicists and; engineers and included research at the LHC, Fermilab's Tevatron accelerator and CERN's Large Electron-Positron Collider. Fermilab scientists have played a significant role in the many steps that led to finding the elusive particle. They worked out new ideas and models in the theory department, built and ran experiments at the Tevatron, which provided evidence for Higgs boson production, participated in the construction and running of the CMS experiment at CERN, which led to the LHC discovery, and provided computing power and intellectual leadership in data analysis at CMS.

In 1993, Fermilab physicists proposed the construction of the world's largest cosmic ray detector, the Pierre Auger Observatory, to address the question of the origin of high-energy cosmic rays. Researchers previously had assumed that cosmic rays approach the Earth uniformly from random directions. However, in 2007, researchers at Pierre Auger announced that the most energetic cosmic rays to impact the Earth generally come from the direction of active galactic nuclei.

Many large galaxies, including our own Milky Way, have a supermassive black hole in its center. While most black holes will sit quietly in the nucleus of a galaxy for billions of years, if a galaxy's black hole happens to be surrounded and fed by a steady stream of gas and stars, it creates what is called an active galactic nucleus. An active galactic nucleus releases high-energy radiation observable by radio, X-ray and gamma ray telescopes on earth.

In addition to pure scientific discoveries, Fermilab is a hotbed of technological innovation. Bold, innovative ideas and technologies from particle physics have entered the mainstream of society to transform the way we live. From enabling the development of magnetic resonance imaging (MRI) machines to building the first proton accelerator for cancer treatment, Fermilab helps overcome the greatest challenges of our time. Construction of Fermilab's particle accelerator in the 1980s required 140,000 miles of superconducting wire, which supported the industry and helped it expand and lower manufacturing costs.

The facilities serve as a world-leading R&D center for numerous technologies, such as superconducting magnets and superconducting radio-frequency cavities, which are crucial for particle accelerators. SRF technology, first analyzed at Fermilab, has potential applications in medicine, nuclear energy and materials science. In addition, the new Illinois Accelerator Research Center at Fermilab will fuel training and innovation in accelerator technology. It will bring scientists from Fermilab, universities and industry together to advance R&D for particle accelerators and transition the resulting technologies to the marketplace, an important effort given that there are more than 30,000 particle accelerators are in operation today across the world, most in the medicine and manufacturing sectors.

And then there's the herd of bison (or buffalo) that roam the property. Wilson brought the first American bison, a bull and four cows, to Fermilab in 1969, thus creating a tradition that recognizes and strengthens Fermilab's connection to its prairie heritage. In 1971, the Illinois Department of Conservation gave the lab 21 more bison and today's herd are descendants of those first animals. Although they look placid, buffalo have the undomesticated personality of the wild. Like physicists, they have been described as "cantankerous" by those who have tried to herd them.